What Is Fluorescence in a Diamond?

Fluorescence is the glow you see when an object emits visible light. Some diamonds fluoresce or glow when exposed to ultraviolet (UV) rays from sources such as the sun and fluorescent lamps.

As a result, they may emit a bluish light or, less frequently, a yellow or orange light. When you remove the UV light source, the diamond ceases to glow. Submicroscopic structures within the crystal cause diamond fluorescence. Scientists associate strong blue fluorescence with the presence of nitrogen atoms aligned in specific arrays within the carbon lattice.

Diamond fluorescence refers to the intensity of a colored glow that you can see when you expose a diamond to UV light. In some instances, diamonds with fluorescence may look milky and lifeless in daylight, but in most cases, even strong fluorescence rarely affects the appearance of a diamond.

Fluorescence is simply an identifying characteristic rather than a performance characteristic, and thus fluorescence is neither good nor bad. In some cases, fluorescence can cause particular diamonds to appear cloudy, reducing their transparency and brilliance. Jewelers frequently describe these diamonds as oily, hazy, or milky. It isn’t good in these cases.

A study performed in 1997 by the GIA found that the level of fluorescence has no widely perceptible effect on diamonds’ color appearance or transparency.

How Does Fluorescence Affect Color Grade?

Because the fluorescent glow is usually blue (which is the complementary color to yellow), fluorescence can make diamonds of I-M color appear up to one grade whiter. Of all the diamonds submitted to GIA for grading, approximately 25% to 35% show some fluorescence.

Alternatively, a J color diamond of any clarity and Medium fluorescence will typically sell for up to 2% more than a like diamond with no fluorescence. However, as we mentioned before, the difference is not bad, as the fluorescence may slightly enhance the visible color of a lightly colored diamond.

Some jewelers say that fluorescence always harms your diamond’s quality and appearance. But here at Clean Origin, we believe that diamond fluorescence is actually more a matter of personal taste. If you understand it correctly, it can be your friend when you’re ready to purchase.

For diamonds with faint or no fluorescence, this does not affect the natural appearance of the diamond. Still, a more fluorescent diamond glows in natural sunlight, too, and this is undesirable to some in a white diamond.

A Diamond with Strong Fluorescence

The exception would be to exercise caution in purchasing a diamond with fluorescence in D-F color or Very Strong fluorescence in G-H color diamonds (which do not possess enough body color to offset the fluorescence and strong blue). Fluorescence grades are none, faint, medium, strong, and very strong.

You may think diamond fluorescence is good. You may like it, or you may not. If you are considering a fluorescent diamond, take the time to look at it under different kinds of lighting, including natural daylight, and compare it to other diamonds of the same color. Some trade professionals think blue fluorescence enhances a diamond’s appearance, especially with I to M color grades. Over 95% of loose diamonds that have fluorescence have blue fluorescence, meaning they will glow a pale blue when put under UV light.

How to Avoid Fluorescent Diamonds

Clean Origin exclusively carried lab-grown diamonds. You can design your dream diamond engagement ring with us by selecting a lab-created diamond and a ring setting.

Lab-grown diamonds are 20-40% less expensive than traditionally mined diamonds. Lab-grown diamonds (also known as lab-created, artificial, engineered, and cultured diamonds) are grown in highly controlled laboratory environments. Advanced technological processes replicate the conditions which naturally develop when they form in the Earth’s mantle, beneath the crust.

Our lab-created diamonds are available in a variety of colorless ranges and fancy colors considered extremely rare in nature, such as popular shades of vivid yellow.

Diamonds are diamonds regardless of where they come from, right? It depends on whether you’re asking a jeweler, a bride-to-be, or someone concerned about mining and manufacturing sustainability practices. While it may be difficult to distinguish a lab-grown diamond from a natural diamond, some significant differences in their origins may influence your purchase and from whom you purchase it. Natural diamonds are created by nature as a result of intense heat and pressure, formed over the course of millions of years.

Diamond mining also has many detrimental impacts on the environment, including soil erosion, deforestation, and ecosystem destruction. While mined diamonds have a negative environmental impact, lab-created ones have no such concerns. Nearly 100 square feet of land is disturbed for every carat of diamond mining. In addition, it produces almost 6000 lbs of mineral waste. In contrast, the process of creating lab diamonds does not disturb the land, regardless of carat size.

Diamond fluorescence is not a grading factor included in the GIA 4Cs ( color, clarity, cut, and carat weight ). If your stone gets a grade by the AGSL (American Gem Society Laboratories), you’ll have a fluorescence grade. Many elements in nature emit fluorescence, which causes its presence in diamonds.

Fluorescence refers to a diamond’s ability to emit a (soft) glow when exposed to ultraviolet light (UV light). The fluorescence effect is present in over 30% of diamonds and is essential to consider when purchasing a loose diamond. Fluorescence is present in a significant portion of the market. Most of those are blue, but white, yellow, orange, and red fluorescence can occur in rare cases.

Fluorescent diamonds sell at up to a 15% discount since the fluorescence is perceived as a defect. In fact, the visible effects of Faint to Medium fluorescence are perceptible only to a gemologist with special tools. Overall, diamond fluorescence should not be a significant factor in purchasing a diamond since its effects are negligible. 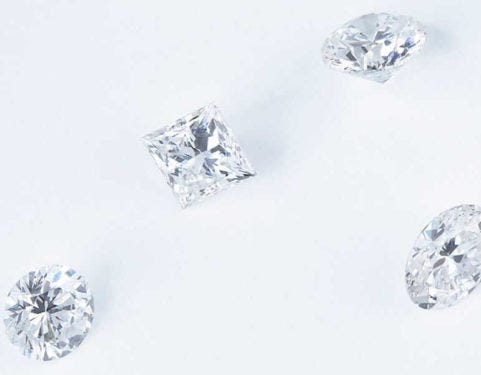 How to buy a diamond
How to Buy Loose Diamonds: Lab Grown Diamonds for Sale
Read more...

Everything Diamonds How to buy a diamond
Why Are Diamonds So Expensive?
Read more... 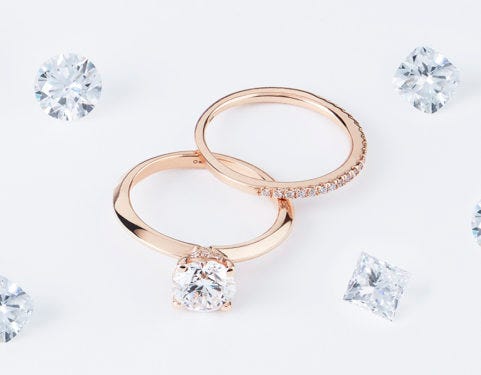 Engagement How to buy a diamond What is Lab-Grown?
What is the Most Expensive Diamond Cut?
Read more...