The Claddagh ring is an important symbol of Irish tradition. From the Claddagh’s origins in Roman times to its creation in Galway, Ireland, the iconic heart, hands, and crown design has long been treasured for its symbolism and sentiment. But what exactly is the Claddagh ring meaning? And how did it come to be?

If you’ve ever wondered about the origins of the Claddagh ring, or even about how to wear one, we have all of that covered and more.

Read on to learn what makes the Claddagh one of the most enduring and beloved Irish symbols.

What Is a Claddagh Ring?

The term “fede” comes from the Italian phrase “mani in fede” which means “hands in faith.” And the Roman symbol of clasping hands represents pledging vows.

The Claddagh ring meaning reflects love, loyalty, and friendship. It consists of 3 elements: clasped hands, a crown, and also a heart. Each of these symbols stands for an important element of a relationship.

It’s not possible to know where the first Claddagh ring originated. But despite its many origin stories, the Claddagh design we know is likely the work of Richard Joyce.

Richard Joyce was a young man from the small fishing village of Claddagh in County Galway, Ireland. While out at sea, pirates captured Joyce somewhere in the West Indies around 1675. A Moorish goldsmith bought him from the pirates, kept him as a slave, then trained him to be a master goldsmith.

Joyce eventually won his freedom and returned to Galway. Soon after his return, he set up a goldsmith shop and created the Claddagh design we know today.

Although debatable, the story that Richard Joyce designed the Irish Claddagh ring is probably true. Historians generally agree on this because one of the earliest surviving Claddagh rings bears Joyce’s mark.

However, there is another popular origin story about the Claddagh. That story tells of a generous woman and an eagle.

Margaret Joyce and the Eagle

When de Rona died he left Joyce half his fortune. Joyce later used her wealth to build much-needed bridges throughout the province in which she lived.

Legend has it that, as a reward for her good deeds, an eagle dropped a ring in her lap. But it wasn’t just any ring; it was a Claddagh ring.

Despite its uncertain origins, the Claddagh tradition remains strong today–and not just in Ireland.

Do You Have To Be Irish To Wear an Irish Claddagh Ring?

No, you don’t have to be Irish in order to wear a Claddagh ring. The Irish Claddagh ring meaning honors universal values that appeal to people worldwide. This naturally makes it a popular ring (especially as a promise ring or engagement ring).

Fans of the Irish Claddagh Ring

There are many famous fans of the Irish Claddagh ring, both of Irish and non-Irish heritage.

Disney cherished his Claddagh ring. In fact, it was so important to him that it’s depicted in his “Partners” statues. These statues hold prominent places at the entrances of some of the Disney parks.

Interestingly, the hand on which you wear a Claddagh ring is significant. So is the direction in which the tip of the heart points.

If you don’t know the proper way to wear a Claddagh ring, then continue reading.

How To Wear a Claddagh Ring

There are 4 ways to wear a Claddagh ring. The way you wear your ring indicates your relationship status as: single, in a relationship, engaged, or married.

How To Wear a Claddagh Ring if You’re…

If you’re single, wear your Claddagh ring on your right hand ring finger. Make sure you have the tip of the heart pointing outwards (toward your fingertips). This tells the world your heart is open to love.

If you’re in a relationship, wear your Claddagh on your right hand ring finger. Make sure you have the tip of the heart pointing inwards (toward yourself). This means someone has your heart.

If you’re engaged, wear your Claddagh ring on your left ring finger with the heart pointing outwards (toward your fingertips). This means you’ve promised your heart to someone.

If you’re married, wear your Claddagh ring on your left hand ring finger with the heart pointing inwards (toward yourself). This means your heart belongs to someone else forever.

Can You Buy Yourself a Claddagh Ring?

Yes, you can. But if you’re superstitious it might not be the best idea. Claddagh rings are traditionally given as gifts; according to Irish tradition, purchasing one for yourself is bad luck.

Can You Give Claddagh Rings to Friends?

They’re also exchanged between family members. In some families, Claddagh rings are passed down through the generations–from mother to daughter, as well as from father to son.

Upgrade Your Claddagh With a Lab Grown Diamond

Thanks to its long and storied history, as well as beautiful design and sentiment, the Irish Claddagh ring continues to be a popular choice for people from all walks of life. And thanks to talented jewelers there is a Claddagh design to suit any taste or preference.

Claddagh rings are made with many different types of materials–and some even include diamonds. We don’t carry Claddagh rings but we do offer beautiful, lab grown diamonds you can incorporate into your ring’s design.

One of our stunning, heart-shaped diamonds will undoubtedly add extra sparkle and shine to your precious Claddagh. We have many diamonds to choose from, and our helpful jewelry experts are always on hand to help you find just the right one. Contact us today to learn more! 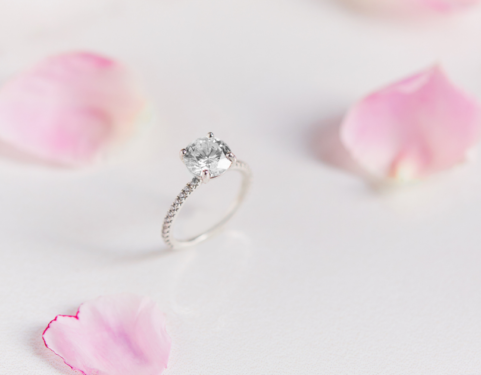 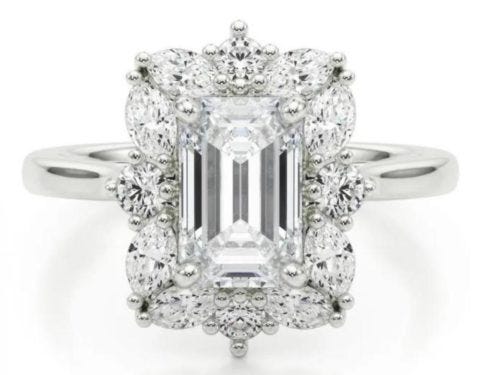