With a Toi et Moi ring design and stunning pop of color, the engagement ring given to Jackie Kennedy by President John F. Kennedy is an iconic piece of jewelry that will stand the test of time. But what makes it so special? We have the breakdown below so keep reading to find out.

JFK and Jackie: The Courtship

Jackie was the daughter of Wall Street stockbroker, John Vernou Bouvier III, and socialite Janet Norton Lee. She earned a BA in French Literature from George Washington University and spoke fluent French, Spanish, and Italian. After a brief stint at Vogue, Jackie moved back to Washington; there she worked for the Washington Times-Herald.

Mutual friend and journalist, Charles L. Bartlett, introduced Jackie and John F. Kennedy at a dinner party. John’s classic good looks, wit, and wealth drew Jackie to him. And with their shared backgrounds they were a perfect match.

In the summer of 1953, after just a few months of dating, John got down on one knee at The Parker’s Restaurant in Boston.

However, the proposal didn’t include the engagement ring we’ve all come to know and love. After announcing their engagement to the press, reporters asked to see the ring. To this Jackie replied: “Jack and I have looked at dozens of them, some I didn’t like and others weren’t the right type.”

After some time, Jackie found the perfect ring. It was a Van Cleef & Arpels 2.84-carat emerald and 2.88-carat emerald cut diamond flanked by a series of baguette-cut diamonds.

In many photos from the time, the emerald ring is turned inward to face the inside of Jackie’s hand. And unlike brides today who proudly flaunt a new engagement ring, Jackie wore the ring in only a few photos.

We may never know why Jackie Kennedy wasn’t a fan of showing off her engagement ring. However, we know it wasn’t because she felt that it was “too much”. In fact, Jackie was quite the jewelry aficionado. Throughout her life, Jackie Kennedy was photographed wearing many fine jewelry pieces. These pieces included ruby ear clips created by Van Cleef & Arpels, as well as pearl ear clips and gilt metal ear clips.

In 1961, as First Lady, Jackie decided to renovate the White House and her engagement ring also. She took the ring to Van Cleef & Arpels to replace the baguette diamonds with a series of marquise diamonds. As a result, the ring appears as a laurel wreath holding the main stones for all to see.

Years after the assassination of President John F Kennedy, Jackie married Aristotle Onassis. Onassis was a longtime friend, as well as a Greek shipping magnate. He proposed to the former first lady in 1968 with a whopping 40-carat marquise diamond named the Lesotho III. The L color diamond was one of only 18 pieces cut from the 601-carat Lesotho diamond which was discovered in South Africa.

The diamond was so priceless that, unsurprisingly, Jackie only wore it twice before locking it behind vault doors.

What Happened to Jackie Kennedy’s Engagement Ring and Other Precious Jewelry?

After her death in 1994, many pieces from Jackie’s jewelry collection sold at auction for well beyond their appraised value. This collection included the Lesotho III, which sold for $2.59 million. It also included various simulated pearl necklaces, diamond rings, and diamond earrings. At the end of the auction, the jewelry sold amounted to $34 million dollars.

Her family donated her 8-carat emerald cut engagement ring, as well as other personal pieces, to the Kennedy Presidential Library. There they will occasionally be on display for public viewing.

Finally, Jackie had two emeralds from her Van Cleef & Arpels eternity ring reset into two rings–one for each of her children. These two rings are special because President Kennedy gave Jackie the original ring on their 10th Anniversary. John Jr. gave his ring to his wife, Carolyn Bessette, the night before their wedding. When they died, the ring went to John Jr.’s sister, Caroline Schlossberg. These pieces have stayed in the family and will most likely continue to be passed down as generations grow.

The Enduring Style of Jackie Kennedy

Jackie Kennedy Onassis remains one of the greatest style icons of our time–and her incredible jewelry collection is no exception. To this day, many brides continue to be influenced by her style and grace.

Jackie had an eye for quality and elegance. She knew how to make a statement with her accessories. Whether she wore a statement emerald and diamond ring, or a marquise sparkler, Jackie Kennedy Onassis set the precedent for always saying “yes” to more diamonds.

Do you want a ring with just as much stunning sparkle as any of Jackie O’s engagement rings? Check out Clean Origin. Our selection of lab created diamonds twinkle and shine to create a ring your partner will say “yes” to. 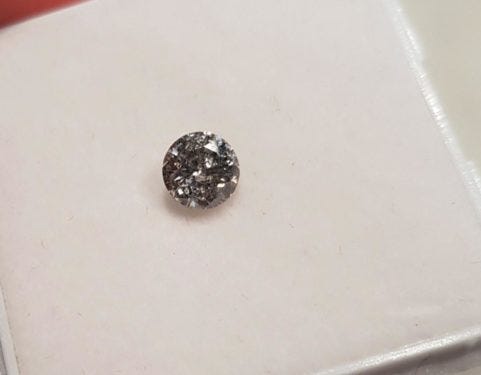 Engagement Ring Trends Everything Diamonds
What Is a Salt and Pepper Diamond?
Read more... 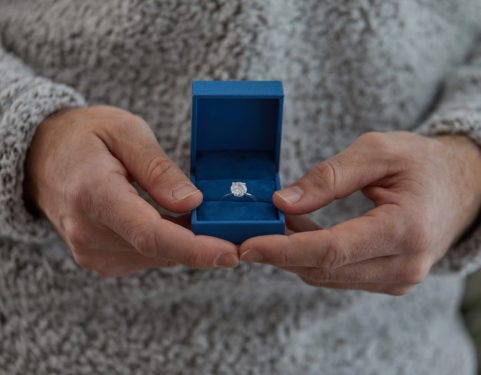 Everything Diamonds How to buy a diamond What is Lab-Grown?
Quick Guide to Lab-Created Diamonds
Read more...