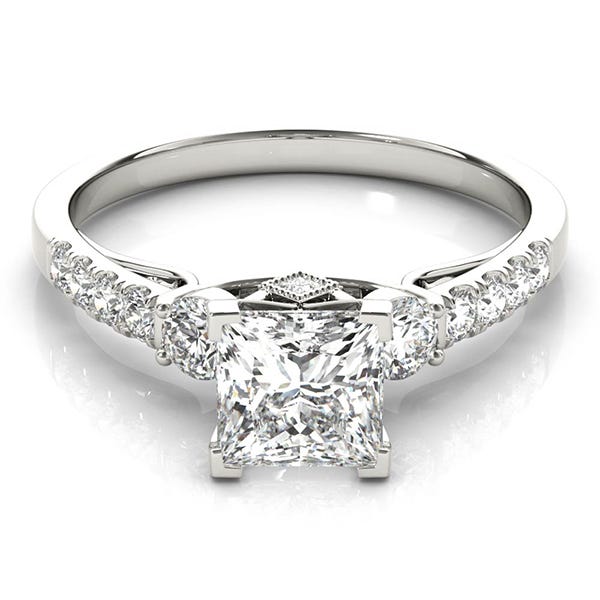 Daring yet stylish, the princess cut diamond engagement ring is for a loved one who wants maximum sparkle yet a modern design. Clean lines and shine galore characterize the princess cut. A princess-cut diamond features a square top, four beveled sides, and a point similar to an upside-down pyramid beneath the surface of the ring. Able to stand out on its own in a solitaire setting or outshine every ring in the room with a halo, the princess cut is the perfect choice for the modern woman.

Browse our extensive collection of princess cut diamonds to find the stylish stone of her dreams. Choose a distinct setting to complement her striking center stone from our Halo, Classic, Vintage, or Solitaire collections to create a ring that will sweep her off her feet. 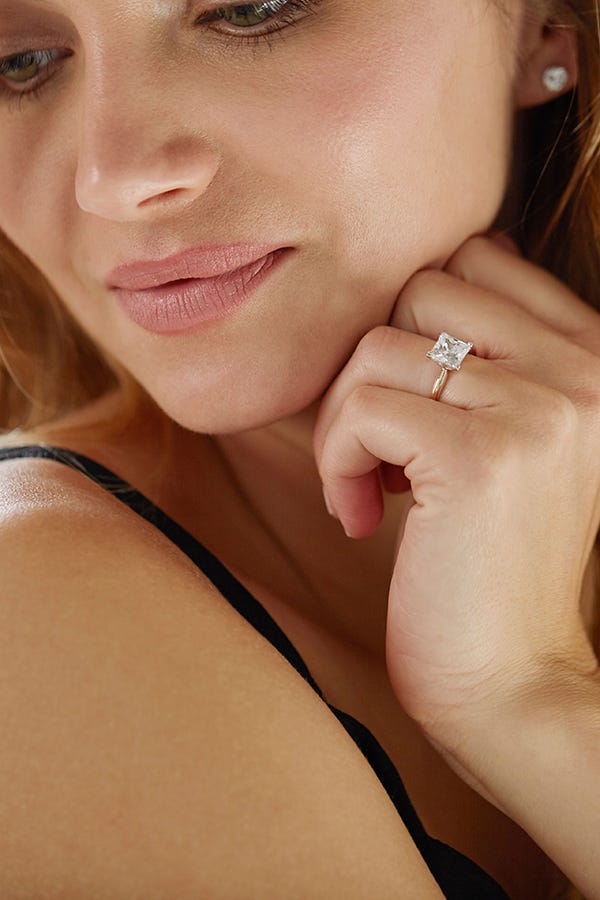 The princess cut ring is a unique style that lends itself to a great deal of personalization. But it can also be difficult to know exactly how to customize this particular shape in a way that works for you. So to help you out, here is a simple guide to buying a princess cut diamond ring.

Consider The Cut — Unlike round-cut diamonds, princess-cut diamonds aren’t judged by industry-wide standards that define their cut grades. When choosing a diamond, you’ll have to look carefully at the stones to see if they have the level of sparkle that you think your loved one would prefer.

Make It Simple Or Spectacular — Princess-cut diamonds are very versatile. Set in a solitaire on a simple platinum band, and the stone will shine in the spotlight. Surrounded by smaller diamonds on a rose gold band, and the diamond will be fit for royalty. Whatever your significant other’s style, you’ll easily find a princess-cut stone and setting combination that will suit her.

Bonus Stone For Your Buck — Because the typical princess stone uses an impressive 80% of the uncut stone, princess-cut diamonds often cost less than other cuts. This means you can get a larger princess-cut stone for the same budget as you had for a smaller size of a different cut stone.

Protect With Prongs — If your loved one is particularly active, it may make sense to choose a setting that protects the princess-cut stone’s sharp corners. A V-prong or similar setting will keep the stone safe—while emphasizing the unique beauty of the princess cut. 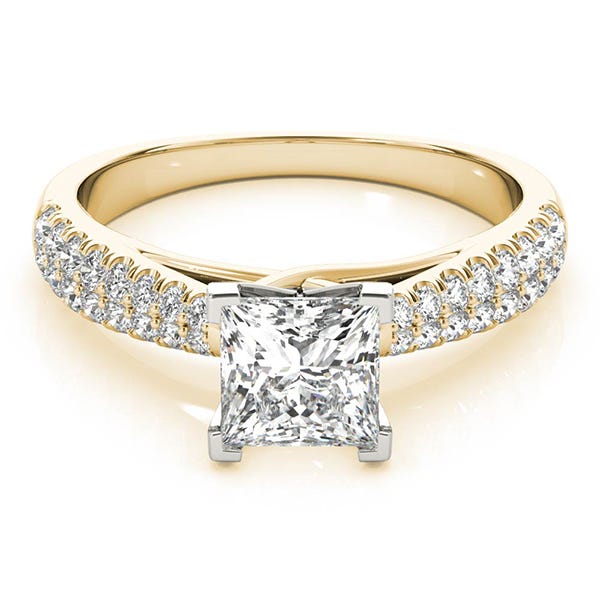 The princess cut is one of the newest diamond shapes available; the cut was invented in 1961 by cutter Arpad Nagy in England. He called it the “profile” cut, though it was commonly referred to as the princess cut even then. The cut was quickly popular due to its economy and striking appearance. Perhaps as a result of its name, some people may wonder if princess cuts are more expensive, but because it utilizes so much of the rough stone (80%), princess-cut stones are priced lower than those with other cuts. Though it doesn’t have quite the brilliance of the round-cut diamond, the princess-cut diamond has more than enough shine and striking lines to create a pleasing aesthetic. These traits catapulted the princess-cut diamond to popularity almost immediately, and it is still rising in popularity today.

If you are looking for some inspiration from a familiar source, you might be interested to read about these celebrities who have opted for princess cut diamond engagement rings.

Kate Bosworth — Michael Polish pulled out all the stops when asking American actress Kate Bosworth for her hand. Kate’s princess-cut diamond rests in a solitaire setting on a platinum ring.

Star Jones — One of the original co-hosts of The View, Star received a real stunner from first husband Al Reynolds. Her seven-carat princess-cut diamond was flanked by baguette and round French-set diamonds.

Snooki — Jersey Shore star Snooki was given her ring by Jionni LaValle, who made a few appearances on the show, then formed a relationship with Snooki off the set. Her three-carat princess-cut diamond is set in a band that holds two-carat round-cut diamonds as well.

Hilary Duff — Hilary and first husband Mike Comrie may not be together anymore, but their engagement ring sure is a stunner. Her 4.5-carat princess-cut diamond was reportedly worth $300,000.