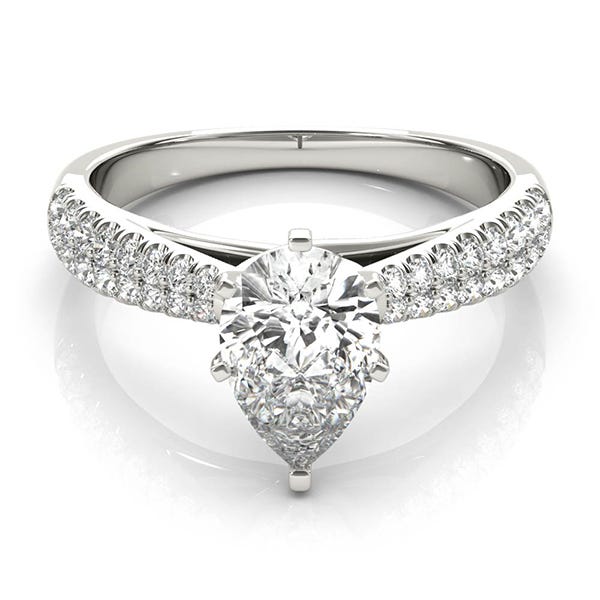 Also known as “teardrop-cut diamonds,” pear-shaped diamond rings are named for their distinctive, unmistakable stone. Pear engagement rings (or teardrop shaped rings) have a particular shape in which one end of the diamond is rounded while the opposite end is sharply pointed. It’s like a marriage between a round brilliant and marquise shape and should land a spot on any bride-to-be’s short list of engagement ring options.

Pear shaped engagement rings strike a perfect balance of traditional and cutting-edge. Dramatic and eye catching, a pear-cut diamond will stand out in a solitaire setting or shine alongside accent diamonds in a vintage-style halo.

Pear engagement rings are known for their versatility and fit in well with any type of setting and in any jewelry collection. You can make pear shaped engagement rings look elegant and sophisticated with a simple gold band, or dazzling and modern in a more intricate band. Whether your intended prefers jazzy jewelry or a more streamlined look, you’ll find the perfect setting in our Halo, Classic, Vintage, or Solitaire collections.

As you compare pear-shaped engagement rings, you will soon find that there are a lot of details that you will have to decide. Whether it’s how you frame the main diamond, or whether to use white or rose gold for the band, here are some of the main choices you will need to make.

Which Way? — When you’re looking at the distinctive shape of a pear-cut diamond, you may wonder which way it’s supposed to be worn. This depends on the lady! It’s usually worn with the tip of the teardrop pointing toward the wearer’s fingernails, but can be worn the opposite way. In recent years, some pear-shaped diamonds have even been set horizontally to create an avant-garde look.

Symmetry and Sparkle — There are a few things to double-check when you’re deciding which diamond you’d like. When you’re looking at a pear-cut diamond, the endpoint should fall exactly between the other side’s rounded edges, which should be even. Your diamond should also sparkle like a round brilliant-cut diamond. With these two qualities confirmed, you’ll be ready to give a perfect pear-cut diamond engagement ring to your special someone.

Beware the Bow Tie — Similar to most fancy cut diamonds, the pear-cut diamond has the tendency to show a bow tie imperfection, a shadow in the center of the diamond. This effect can be easily identified with a visual inspection by your jeweler, who will refer back to the certification report to ensure that any bow-tie effect in your diamond matches its notation on your certificate. 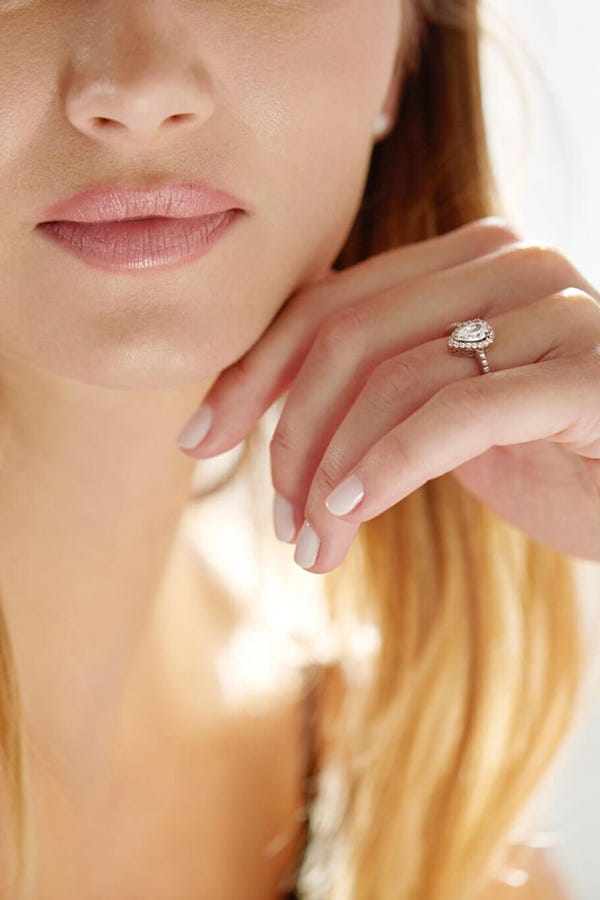 The pear-cut diamond has an edgy, modern look—but it’s not a new style. In fact, the cut traces back to the 1400s and a Flemish polisher, Lodewyk van Berchem. He was also one of the main artisans who figured out how to cut diamonds in a way that maximizes their shine. Although the cut wasn’t received well when it was introduced, the pear-cut diamond slowly gained favor with the public throughout the ages. Its popularity was confirmed in 1969 when Richard Burton and Elizabeth Taylor purchased a massive 69 carat, pear-cut diamond ring that she later had set in a necklace. Today, as couples in love seek unique rings that are more tuned to individual personalities, the pear-cut diamond continues to grow in popularity.

These are just a few of the most famous people with pear-shaped engagement rings.

Victoria Beckham — Although Victoria had a beautiful marquise-cut engagement ring from David Beckham already, she decided to exchange it for something more unique (with a higher carat weight). Her new 15–17 carat, pear-cut solitaire diamond engagement ring is set in a platinum band.

Katherine Heigel — Katherine Heigl was gifted her gorgeous engagement ring by hubby Josh Kelly in 2006. The 3 carat, pear-cut diamond sits in the center of a gorgeous pear halo with a complementing pavé band.

Anna Kournikova — Whether they’re married or not is still a question, but Enrique Iglesias’ significant other definitely has a stunner of an engagement ring. Her 11 carat, pear-cut pink diamond is flanked by two triangular diamonds that only add to its beauty.

Princess Charlene of Monaco — Prince Albert’s gift to Princess Charlene added some sparkle to her chic style. Her 3 carat, pear-cut diamond is surrounded by brilliant round diamonds and set on a white gold band.

if you aren’t happy

Your precious package is

All our lab grown

We’ll help you get it just right