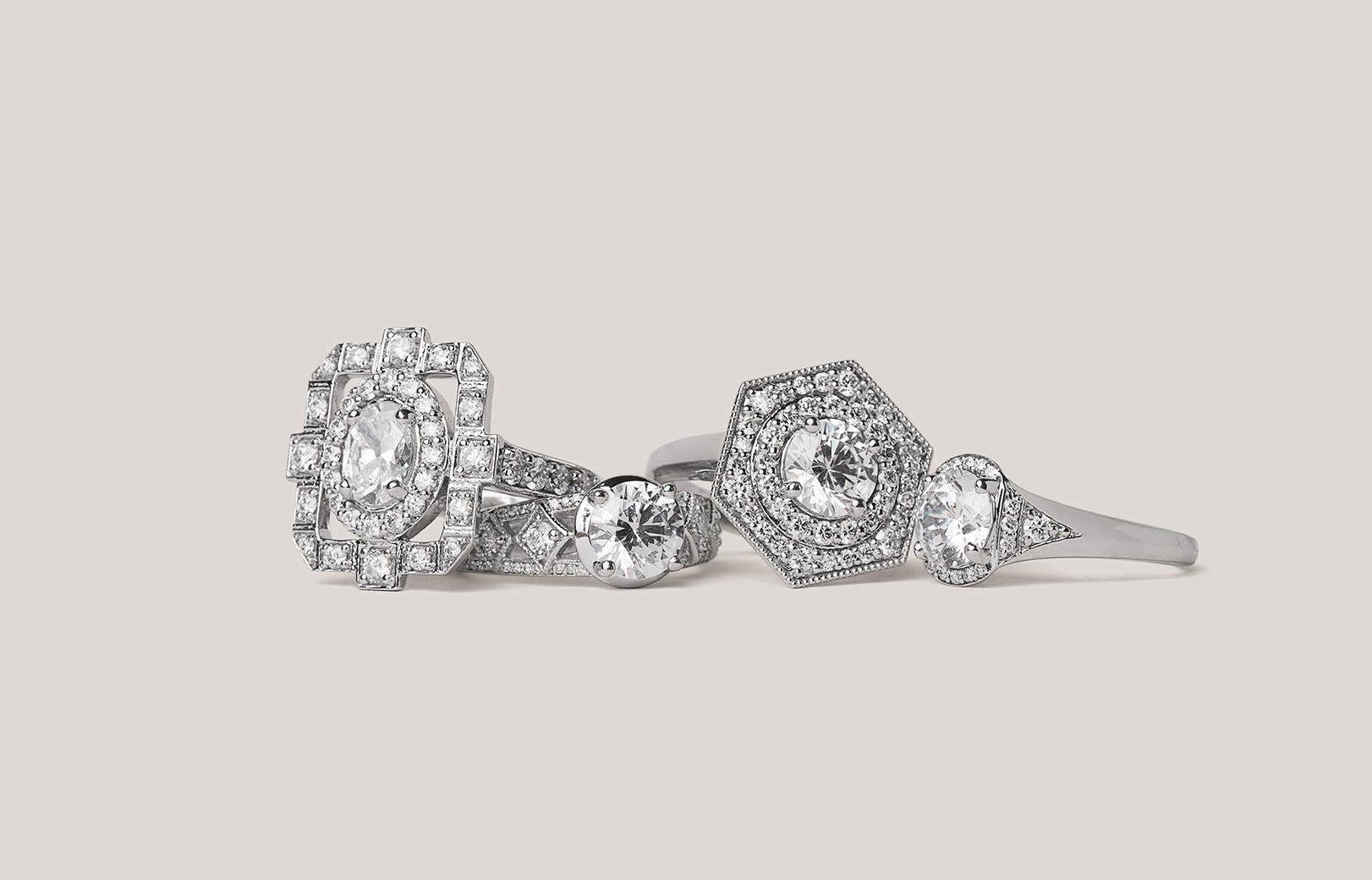 Are you considering a retro engagement ring? You are in the right place. These stunning rings feature one-of-a-kind geometric bands and settings. No matter the cut of diamond you choose, a striking Art Deco band will add glamour to your loved one’s diamond engagement ring (or wedding band).

The Perfect Retro Engagement Rings for the 2020s

Art Deco engagement rings are the perfect match for a daring leading lady. Defined by the artistic symmetry that was popular in the Roaring Twenties (and is poised to be just as relevant in the 2020s).

While all Art Deco engagement rings feature geometric designs, they still come in various styles. Look through your loved one’s jewelry to determine whether they will prefer a simpler ring or if they will want a dramatic statement piece. Pay homage to the 1920s by choosing an emerald cut, or Asscher cut stone for your diamond ring.

Halo or No Halo

If you’d like a larger carat diamond but don’t have a lot of extra money to spend, an Art Deco engagement ring may be the solution. A 1920s style diamond engagement ring will often feature a halo since they are always symmetrical. Halos look fantastic in yellow gold, white gold, or platinum.

These halos can add extra carat weight to the diamond ring without making a significant dent in your wallet. A halo will also create the visual illusion that the stone is larger than it actually is. This is a beneficial tip when shopping for a diamond engagement ring.

In the 1920s, diamonds weren’t as popular for engagement rings as they are today. Instead, these rings often featured stones like sapphires and rubies alongside a diamond. Opt for a yellow gold or rose gold band to bring that color back into your Art Deco diamond engagement ring.

This bold metal choice of rose gold will allow you to stick with a diamond while still bringing a pop of color to the ring.

Build Your Own Modern Classic

Traditionally Art Deco engagement rings were made of platinum. Now you can choose whether you want yellow gold, white gold, rose gold, or platinum.

You can choose and build an ideal modern version of these antique engagement rings. By selecting a metal other than platinum, you will decrease the price while staying inspired by the fashion of the 1920s era.

The Art Deco era design movement appeared just before World War I and developed into a popular style in the 1920s and 1930s. The movement influenced everything from buildings to cars and jewelry to radios.

Choose Platinum and Alternative Stone or Cut for a Classic Look

As such, during the 1920s, Art Deco engagement rings were all the rage. In keeping with the design of the times, these rings were always symmetrical, often featuring diamond-encrusted bands and halos to highlight linear shapes.

Diamonds weren’t as popular for engagement rings as they are today. Engagement rings of the time often feature an alternative stone like an emerald or sapphire instead of a diamond. Through recreating these styles today with a diamond set in white gold or platinum will give the bold style a modern look. Check out an Asscher or Emerald cut set in platinum.

An entire century later, think of shopping these vintage-style engagement rings as a time machine back to the 1920s. As you peruse these beautiful vintage inspires styles to imagine yourself enveloped in the classy styles of the early 20th century.

When speaking about Art Deco, we are talking about the decade between 1920 and 1930. This era is famous for the flapper fashions, artistic rebellion, classic styles, and ornate and classy jewelry design.

What Inspired the Art Deco Era?

Post World War I, many people were ready to cut loose, and thus was born the Roaring Twenties. The 1920s was a pivotal time in which people were hungry for change.

World War I was devastating for many people, and they sought significant changes. People sought escape from the fall out of the war. Interestingly, women began to enjoy some liberation through their clothing, dance, flapper lifestyles, and personal expression through jewelry.

This beautiful and dramatic change produced a massive shift in fashion. The new wave of influence encouraged a revolution of style. Of course, this played out famously in jewelry, which extended to engagement rings.

Influences on the 1920s Engagement Ring

The Impact of Art Nouveau

Early on, Art Deco engagement rings adopted Art Nouveau's decorative and flowery accents in sleeker designs, like this antique art nouveau engagement ring. As the 1920s progressed, we say the style evolve into increasingly symmetrical and geometric motifs. The Edwardian style influenced 1920s jewelry makers and designers to use diamonds and platinum in crafting engagement rings.

What Is the Difference Between Edwardian and Art Deco Engagement Rings?

Art Deco and Edwardian style engagement rings are very similar because they both use intricate geometric settings and shapes. Also, they both often feature Platinum bands. Edwardian jewelry is from the 1900-1915 era and is named after England's King Edward 7th. They are still two very distinct styles of antique engagement rings.

The complex designs were elegant in appearance, which led jewelry design into the Roaring Twenties when Art Deco jewelry took over in popularity until the late 1930s. There are some common differences between the two styles. For example, Edwardian design commonly incorporates many small diamonds on a large band, while white gold and colorful gems are reminiscent of the Art Deco era.

In the 1920s, The cocktail party was a creation of the 1920s. This invention became incredibly popular, and thus did the cocktail ring came into fashion. The style of the flappers characterized the Roaring Twenties. The flappers enjoyed wearing jewelry designed to complement their sense of fashion.

Anyone who has seen or read the Great Gatsby understands the essence of Art Deco. One may also describe it as the 1920s modernist decorative style, influencing everything from interior decor and architecture to fashion and jewelry.

Pair an eye-catching Art Deco band with a round-cut diamond for a blend of the traditional and the cutting-edge. Or, you can combine an Art Deco style band with a cushion-cut stone for the ultimate statement piece. Whichever diamond you choose to crown the band, you’ll be sure to have a vintage beauty on your hands.